The Oasis in The Almedalen Week 2022

The democratic meeting-place for all! 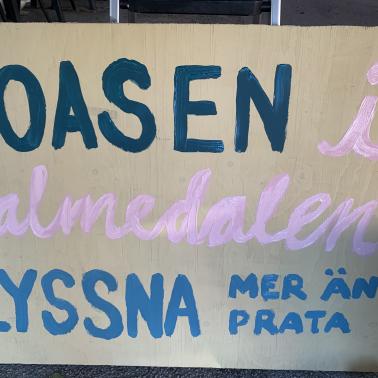 Almost 20 dialogues of 90 minutes each were held this year, for 200 participants. Each conversation had a topic like “Global warming”, “Men’s violence against women”, “The Pandemic”, “War and Peace”, “Indigenous population”, “Mental Health”, “Is our Democracy in danger?”, etc. IofC made this possible by a large part of the founding of the project. The Oasis was held on a schoolyard, 200 meters away from Almedalen - the valley with elm trees by the sea. We created the meeting spot in a warm and welcoming way. Everyone was invited to hang with us outside the tent. The theme for the meeting spot on the school yard was: ”Does our society need more places for spontaneous meetings?

The Oasis is the holding metaphor for the quality of the dialogues. The Oasis is about enjoying and shedding my guard to be in a calm place within society. Everyone feels better when being centered and at ease. I then get more present and aware of myself being a part of the context. I also get more interested in other people and their perspectives.

Sometimes exceptions from this ability to enjoy one’s calm place might demonstrate its strength. During Dialogue Cafées, a few people have violated the format.  Two of these incidents took place this year.

• Rasmus Paludan, the Koran burner, came to the first dialogue. He brought two friends and was followed by three civil policemen.  The police officers sat down outside the circle, Paludan with friends took place in the circle. The theme was “Democracy and freedom of expression”.

We didn’t recognize him at first. Yet, he directly demonstrated a peculiar behavior, preparing to make a statement – while one of his friends started to film. Gently, we spoke with him asking to respect the format and stop filming. After a few minutes, he decided to leave the circle with his followers – and the rest of us appreciated being able to start the dialogue on the topic.

• Another day, we had a dialogue on “What does it mean to be Swedish? Who gets included?” This was a conversation with lots of energy among a totally 18 to 20 participants. Vulnerable newbies in Sweden, “old Swedes”, and aggressive haters of Islam participated. Two of the latter categories came very late, and one of them – a well-known media personality – got antagonistic towards Islam and indirectly towards other participants. Here we had to make her stop the violation of the format, first gently, then more firmly. She left with her friend after a short while.

• A more peaceful, sensitive, and deep conversation on the “Indigenous people'' theme. Five persons born into the Sápmi tradition participated. The dialogue was important for all of us. A tremendous mutual understanding was raised. There is such little awareness about the history of the Sápmi people in Sweden, and it's a tragedy that Sweden continues to exploit the Sápmi region and destroy the forest. It's high time that the Swedish people are made aware of their colonial history and reconcile with the indigenous people of Sweden.

• The most dramatic and tragic event took place just 150 m from The Oasis It was the murder of Ing-Marie Wieselgren. She had a central position at SKR (Sweden's municipalities and regions), organising the healing of mental illness in Sweden. This crime happened in the middle of the week. We decided just to continue. Our mission was needed more than ever.

• The dialogues went on smoothly every day. Our Dialogue Hosts did a great job hosting and holding the space for different perspectives to meet and develop!

• We set up The Oasis in the schoolyard. Decorated, put up signs, curtains, and banderoles inside and outside the big tent. After each day, we had reflections and a swim and made dinner together in our tiny house 5 km outside Visby.

• During fall 2022, we plan to follow up on this in different events in Stockholm. And starting to plan for The Almedalen Week 2023!