COP26 - It fell short, but was not a total failure

The Journey to COP26 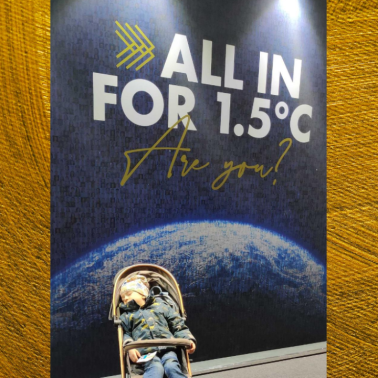 It was a long train journey for myself and my son to travel from Stockholm to Glasgow. For me, the trip was as important as the destination. Our carbon footprint to reach Glasgow was a fraction compared to the elite who took private jets to get there. The journey helped me and my son to have quality time together and witness the beautiful landscapes of Sweden, Denmark, the Netherlands, and the UK. He was mesmerized by the offshore windmills in the sea. I was amazed to see how solar panels have become part of the European landscape, as we witnessed sheep grazing around the solar panels in a symbiotic relationship.

Arriving at the COP26 in Glasgow was no less than a circus.  What attracted my son most was the creative demonstrations and the rhythmic music of the drums that played outside the venue. A four-year-old was a rare species amidst the policy experts and climate activists. However, many thanked me for bringing Arne (my son) to the conference.

Not a complete failure

The negotiations were quite intense, full of adrenaline and stress. Unfortunately, they did not meet the expectations of most of us, who were hoping for a more ambitious and tight treaty. Nonetheless, I think that COP26 was not a complete failure because of the following reasons:

There is much stronger text on phasing out the use of fossil fuels, with countries like India pledging to derive 50 percent of their energy from renewable energy in the next 10 years. Despite the weakening of language around coal, some observers will still see the deal as a victory, underlining that it is the first time coal is explicitly mentioned in UN documents of this type.

Coal is responsible for about 40% of annual CO2 emissions, making it central in efforts to keep within the 1.5C target. To meet this goal, agreed in Paris in 2015, global emissions need to be reduced by 45% by 2030 and nearly zero by mid-century.

According to Scotsman, almost 130 trillion USD has been pledged towards making the transition from fossil fuels to renewables. The task that lies ahead is quickly turning pledges into action.

Finance has been a significant concern, especially for developing countries and the Least Developed Countries (LDCs). Despite the commitments being made in Paris, the money has still not been delivered. A pledge by developed nations to provide $100bn (£75bn) per year to emerging economies (made in 2009) was supposed to have been delivered by 2020. However, the date was missed. It was designed to help developing nations adapt to climate effects and make the transition to clean energy.

Since the pledged climate finance was not delivered, Mr. Sharma (President of COP26) said around $500bn will be mobilised by 2025. As the amount of money raised has increased five-fold, it could go a long way in supporting developing countries to mitigate and adapt to climate change. Fifty percent of this finance would focus on meeting the adaptation needs of vulnerable countries who experience more extreme climate events that disrupt infrastructure, supply chains, and livelihoods whilst also creating millions of climate refugees.

Close to USD 12 billion was pledged to prevent the degradation and deforestation of forests. This pledge would promote "the full, effective, and willing participation of Indigenous Peoples and local communities in programs that protect and restore forests, reduce deforestation and forest degradation, and ensure that benefits reach smallholders and local communities." As a steering committee member of Initiatives for  Land, Lives, and Peace and a co-founder of Earthbanc, I genuinely welcome this pledge as it could build momentum for scaling nature-based solutions.

We developed our carbon marketplace with satellite and remote sensing to audit the rate of deforestation and utilise the data to minimise and stop deforestation from human activities. Our technology also audits reforestation and regenerative agriculture carbon sequestration. We now have much work to do in auditing carbon credit and offset claims to ensure the carbon reduction and removal amounts are accurate, strengthening trust in voluntary carbon markets, and supporting co-benefit verification such as biodiversity, ecosystem services, and sustainable livelihoods.

There are several other achievements of the COP26 worth noting, with pledges ranging from climate and health to the initiative on One Sun One World: One Grid, and of course, a 30% cut in methane emissions by 2030. However, the combined pledges and initiates only take us from an average of 2.7 degrees global warming to 2.4 degrees. This translates into a pledged reduction from 52.4 gigatonnes of emissions by 2030, down to 41.9 gigatonnes, leaving a gap of 26.6 gigatonnes, falling considerably short of 1.5 degrees.

These temperature rises would lead to runaway climate change, very extreme climate events, and in many coastal and arid climates - a complete breakdown in much of the modern infrastructure we take for granted such as power, low-lying roads, coastal cities, water supply, and modern sewerage systems. Ultimately that breakdown leads to a broken global economy - and a world that genuinely doesn't work for most people.

We are a long way away from the necessary 26.6 gigatonnes of emissions reduction by 2030 to be on track for 1.5 degrees. Even though we have a major gap, we need to build on the momentum and do what we can to make this transition happen. Earthbanc is on a mission to enable the required 26.6 gigatonnes of carbon emissions to be sequestered and stored in trees, grasslands, soils, wetlands, marshes, mangroves, and seagrass meadows across the world.

Our satellite AI technology enables accurate measurement of carbon reductions and accurate carbon credits to be generated, solving a significant credibility issue facing today's voluntary carbon market. We work with corporations and small to medium enterprises to offset their emissions, and enable online platforms to integrate our carbon offsets into their platforms for their end-users - to scale up positive climate action through a data-driven, transparent approach.

Rishabh Khanna is the Chief Impact Officer at Earthbanc, a climate fintech company delivering the world's first continuously audited offsets via our API. Join us in our mission to scale nature-based solutions through credible, audited carbon offsets. Read more at https://earthbanc.io/ and sign up for updates and product launches.